Beer is popular in Costa Rica. Almost one-half of Costa Ricans drink beer. For visitors, beer is a great way to cool off and wind down from a day of surfing, hiking, snorkeling, bird watching, swimming, fishing, exploring volcanoes, rafting, and/or any of the other fun activities that you can do in Ticolandia.

The Tico beer experience includes inexpensive domestic mass-produced lagers and pilseners. You can get the imported brands that you may already know. And, since 2010, there is a vibrant and growing microbrewing community.

No matter your preference, you can probably find the beer style that you prefer.

A company called Florida Ice & Farm dominates the mass beer market in Costa Rica. They import and distribute both foreign brands that you may be familiar with, like Corona. 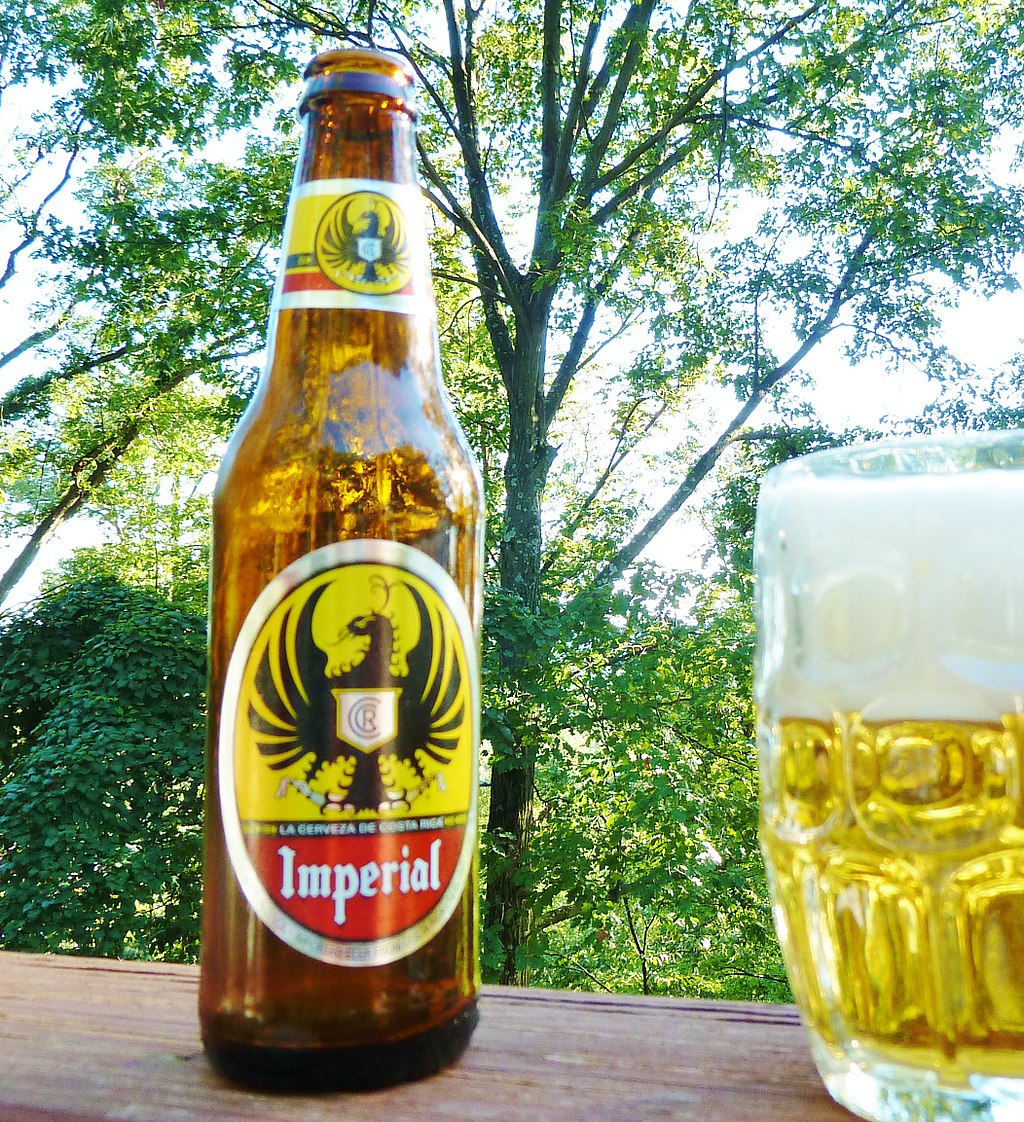 Imperial is the most famous Costa Rican beer brand but it is hardly the only domestic beer available. Photo: Ekem [CC BY-SA 3.0 (https://creativecommons.org/licenses/by-sa/3.0)], via Wikimedia Commons

Imperial is the most well-known and longest running beer brand in Costa Rica. You can find its logo on shirts and hats and other random merchandise all across the country. It is universally served in bars and restaurants throughout the country.

It is a lighter-bodied beer that pours a clear golden yellow with low-to-moderate carbonation. It is 4.5% alcohol.

In the year 2024 it will celebrate 100 years of being brewed in Costa Rica.

Locals often refer to Imperial as una aguila (an eagle) in reference to the logo.

Imperial comes in a few varieties. These include:

Pilsen is a Bohemian Pilsner beer. Compared to Imperial, Pilsen has a stronger flavor and is slightly stronger in alcohol content, at 5.1%.

It sometimes referred to as una rubia (a blonde).

Like Imperial, Pilsen usually runs between 1,100 and 1,200 colones, or about two bucks. 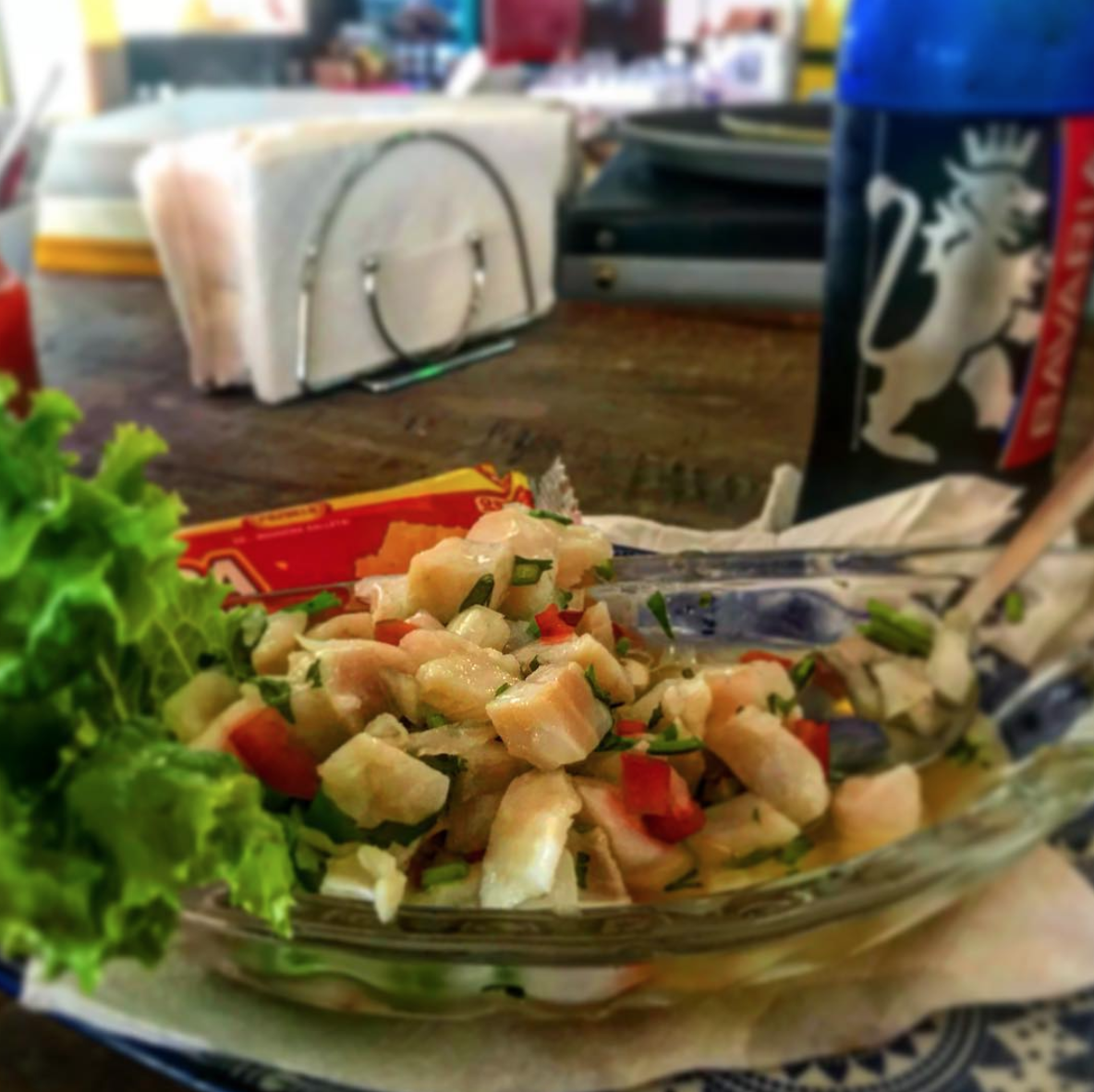 There are at least five different varieties of beers that carry the name Bavaria. These include:

Rock Ice is among the least respected mass produced, so-called macro-brews in Costa Rica. it is brewed using fractional freezing to increase the alcohol content; its ABV is 4.7%

There are two fruity variants:

Bohemia beer is an American Adjunct Lager with 4.3% ABV. Despite the name, it isn’t a beer that you would mistake for a Czech Republic brew. It tastes mostly of corn.

Kaiser is a low-alcohol beer. It is allegedly processed using an “osmotic membrane” to filter out the alcohol while maintaining a quality beer taste.

Since 2010, Costa Rica has been part of the microbrew/craft beer movement. The largest variety of domestic craft beers are available in San Jose and the Central Valley area.

The raw materials for brewing beer, such as malts, grains, and hops must be imported to Costa Rica, due to the climate. In 2012, opportunistic entrepreneurs began importing these items, spurring a proliferation of microbrewing and craft beers. At least 15 microbreweries, making new varieties of Costa Rican beer, were founded after 2012.  As of 2016, there are 85 craft beers registered with the national Ministry of Health. 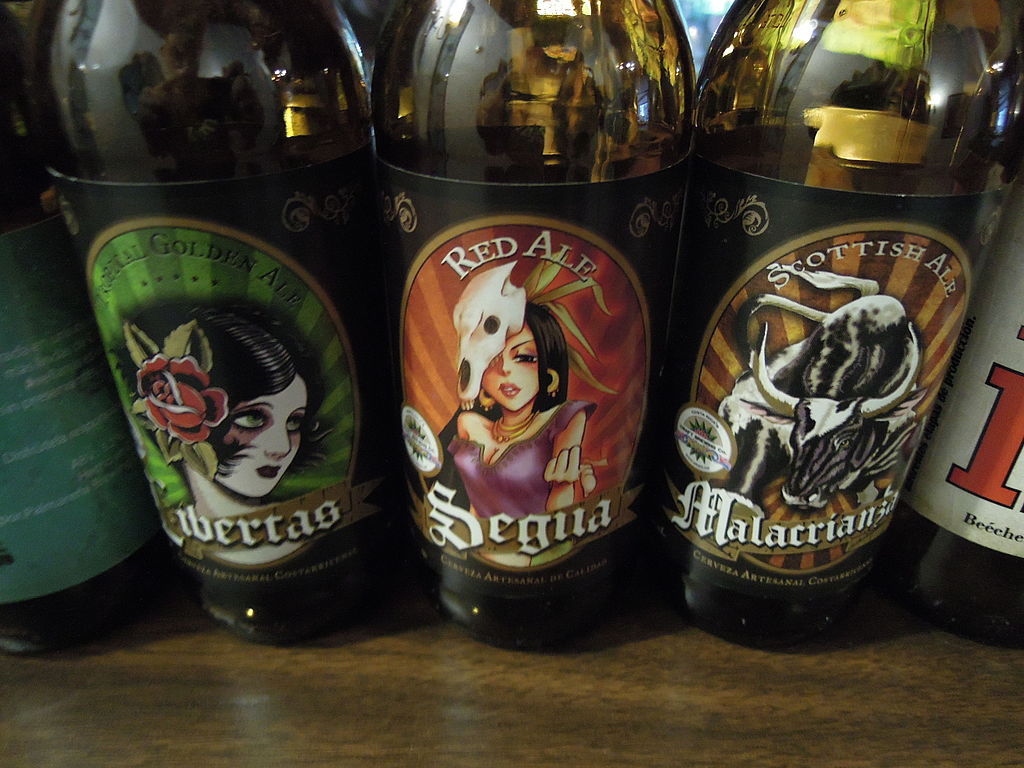 Costa Rica Craft Brewing Company is one of the first legal microbrewers in the country. They are located in Ciudad Colon, on the east side of the Central Valley.

The company has produced at least twelve different beers; however, there are two continuously brewed beers that are the backbone of their portfolio:

Libertas is an American Blonde Ale with a 4.7% ABV. It is among the very first craft beer brewed in Costa Rica. The first batch was offered in 2010.

Segua is an American Amber / Red Ale with a 5% ABV. This medium-bodies beer has a toasted malt, slightly sweet taste, not unlike a caramel malt.

This microbrewery, named for the numeral 35 in Spanish, is the largest in terms of production. In 2016 it produced 250,000 liters.

Treintaycinco has produced at least eleven beers. We are going to focus on three of them:

This strong brew is an American Barleywine, with a 9.8% ABV. It has a strong malty taste with noble hops and slight cocoa undertones.

This American Porter is 7.8% ABV and is available on a rotating basis. It is a medium body beer with tastes of cocoa, honey, and coffee.

This Pale Ale is 6% ABV and is continuously available. It is not overly bitter and has a nice mouthfeel.

This brewery is Florida Ice & Farm’s answer to the microbrew/craft beer trend in Costa Rica. They have produced at least nine beers, including Tanomanso and #7 Golden Ale.

Where to Get Craft Beer in Costa Rica

Craft beer, or cerveza artesenal, as it is known in Costa Rican Spanish, is becoming more available throughout the country. Here are some restaurants and bars where you can find it:

Barrio Escalante is a trendy neighborhood on the east side of San Jose with many restaurants and bars.

Barrio Amon is a historical neighborhood with large homes of stunning architecture.

Escazu is an upscale suburb west of San Jose

Santa Ana is another upscale suburb west of San Jose

Downtown San Jose is the most urban part of the Central Valley.

Ciudad Colon is a small town west of Santa Ana.

Cariari de Heredia is a nice area near the airport.

Alajuela is northwest of San Jose.

Jaco is the closest beach town to the Central Valley.

Nosara is a small beach town on the Nicoya Peninsula

Samara is another Nicoya Beach Town, south of Nosara.

Puerto Viejo is a funkly beach town on Caribbean side of Costa Rica, in the Limon Province.

La Fortuna, known for its thermal springs, lies in the shadow of Arenal Volcano.

Ready to explore the beer of Costa Rica? Check the current prices on flights.

link to Keto in Costa Rica

You can eat a low carb ketogenic diet but it takes some planning and knowledge. Learn more.