Costa Rica is well known for many wonderful tourist activities such as surfing on the beach, ziplining through the cloud forest, exploring volcanoes, and other fun outdoor activities. However, there is nothing more popular than an up-close encounter with a sloth.

Sloths, or osos perezosos, as they are called in Spanish (which literally means “lazy bear”) are practically the national symbol of Costa Rica.

If it is important for you to spend some time with sloths during your Costa Rican trip, then you probably should put some planning into making that happen.

There are many ways to see a sloth in Costa Rica. Sure, if you go to one of the popular tourist places like Manuel Antonio National Park, or the area around La Fortuna, then you might see a wild sloth in the jungle.

Jungle sloth tours are another option. These kinds of tours are a good way to experience Costa Rican sloths in a natural setting in the jungle. But, still, you may only get a fleeting up-close glimpse, or only see them at a distance.

How to See a Sloth Up Close in Costa Rica?

The best way to have a delightful and educational encounter with a sloth is to visit and support one of the country’s wildlife rescue centers or animal sanctuaries.

Rescue centers accept and care for animals that are in peril. These centers take in injured animals and those that have been caged and/or abused by people. They also accept baby animals whose parents have died or abandoned them, leaving them vulnerable.

Many sloths find themselves in rescue centers after being electrocuted while traversing power lines. 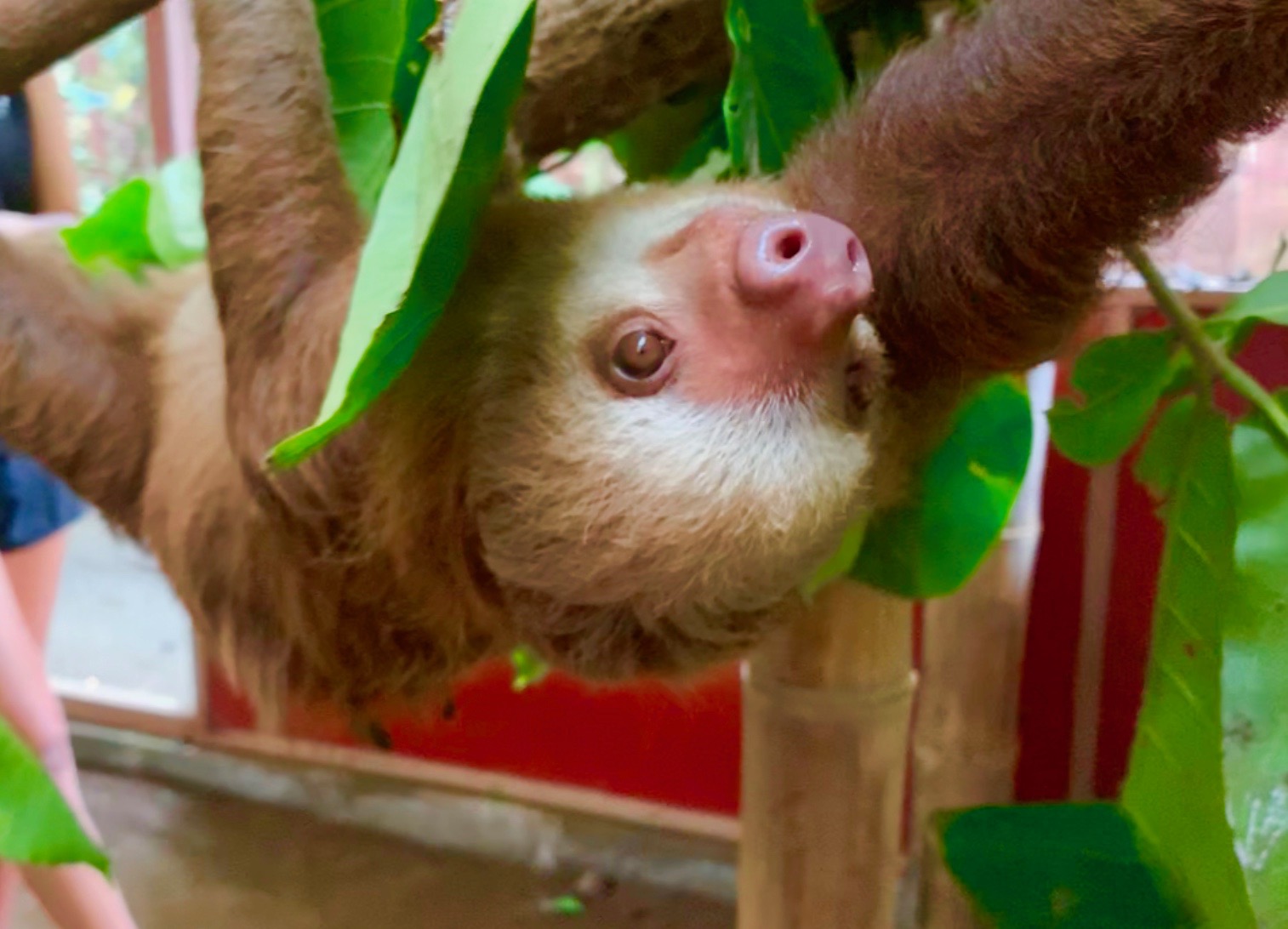 This adolescent two-toed sloth is cared for at the Jaguar Rescue Center near Puerto Viejo, Costa Rica.

The ideal outcome for the rescued animals is that they become ready to leave the protection of the rescue center. In this case, the animals are usually released in a wildlife refuge.

Sometimes, wild animals can never safely leave. Those that have been accustomed to interacting with people, like those kept as pets, or raised in a petting zoo, would be at risk of being killed by a human that they approached.

Animals that are permanently compromised by an injury also may never be released.

In these cases, animal sanctuaries care for these creatures indefinitely.

Some organizations, like the most recent we visited, Jaguar Rescue Center, near Puerto Viejo, in the Caribbean zone, function as a rescue center, a sloth sanctuary, and it facilitates releases to nearby refuges.

Most, if not all of these organizations are nonprofit. Workers are usually volunteers and the organizations are sustained by financial donations and other contributions. When you take a tour at one of these facilities, your money is going to support the mission.

Most places require a reservation in advance. Don’t expect to just show up.

Their main purpose is to care for animals. It isn’t to tend to tourists. Please respect that fact and make sure that you schedule your visit in advance. You can make those reservations online.

Most tours or educational visits (different places use different words) come with a suggested donation between $40 and $60 per person.

We recently made a $60 per person donation to the Jaguar Rescue Center and enjoyed an outstanding, bilingual private tour given by one of the long-term volunteers, Ivey. She was like a walking naturalist guide.

The sloth’s natural habitat is the jungle. This means that you will find yourself in a hot and humid environment with lots of creatures around. Some will be obvious and some will be small insects.

Dress appropriately. If mosquitoes sting you then you will really get it in the jungle.

Most rescue centers and sanctuaries also work with animals other than sloths.

You will most likely see monkeys, birds, snakes, caimans, and other species that are found in the jungle. 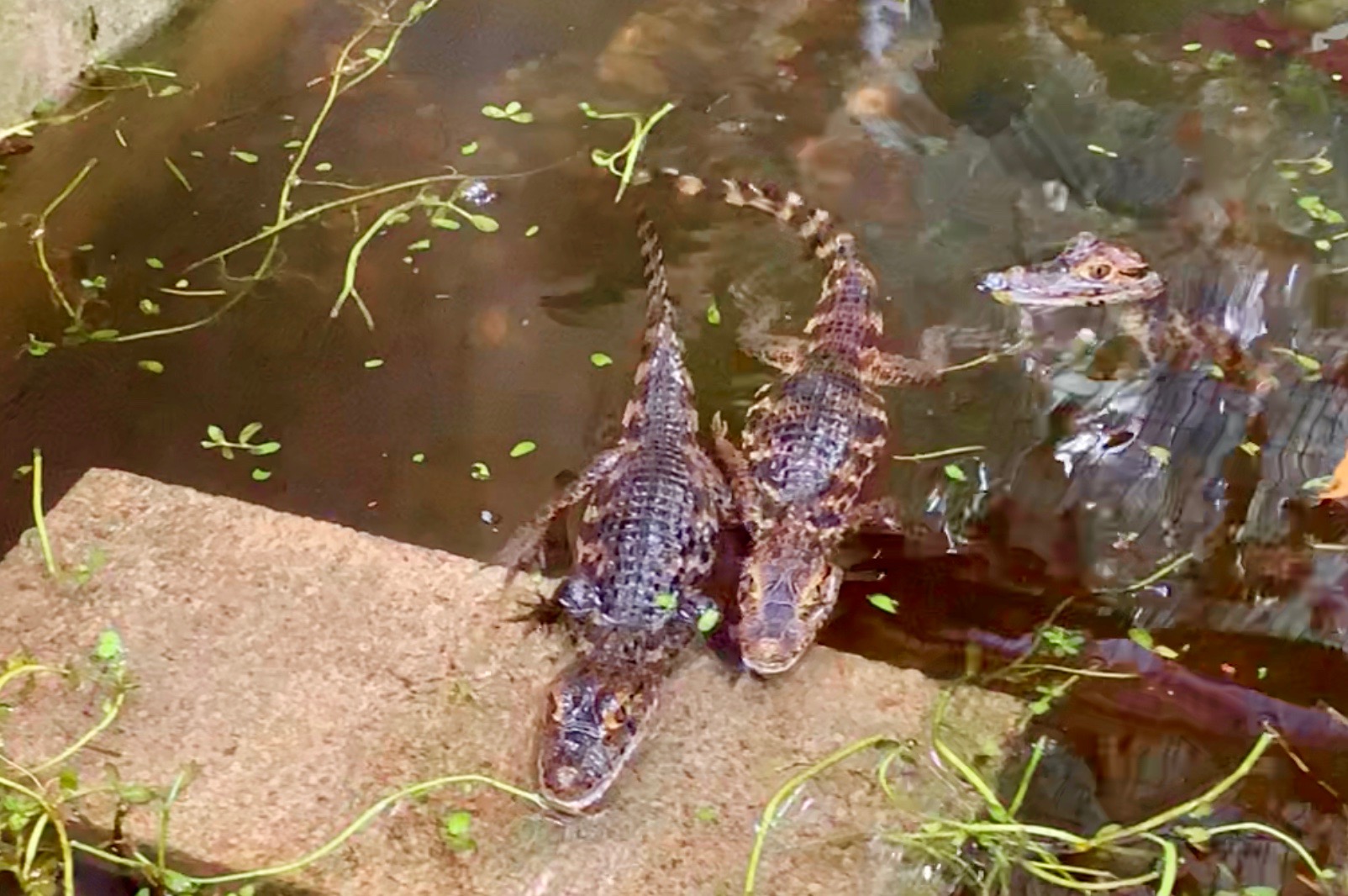 What Types of Sloths Will I See in Costa Rica?

While there are six species of sloths in total, you are most likely to see one of two species in Costa Rica, Hoffman’s Two-Toed Sloth and the three-toed, Brown-Throated Sloth.

The Hoffman’s Two-Toeds are more active at night and usually sleep during the day. They have a bushy coat and a white ring around their faces.

The Brown-Throated Sloth is usually brownish-gray or tan, with darker fur around their throat.

Where are these rescue centers and sanctuaries?

There are rescue centers and/or sanctuaries on the Nicoya Peninsula, in the south Pacific area, the Osa Peninsula, in Limon Province in the Caribbean zone, near San Jose, and near Dominical on the Pacific side.

Can I hold a sloth?

Don’t expect to hold a sloth.

To a sloth, humans resemble a predator.

Any worthwhile rescue center or sanctuary will not let you touch the sloths in their care.

Sloths can be aggressive if they feel threatened. They will protect themselves from a perceived threat by slashing with their long claws or biting.

Why do sloths move so slowly?

Sloths aren’t lazy. They are evolutionarily adapted for survival in their environments.

They eat very little and expend few calories. In fact, they have the slowest metabolism of any non-hibernating animal.

Moving slow helps them avoid the attention of potential predators. Their slow movement also helps them regulate their body temperature.

Often, sloths smell unpleasant to people. It is no wonder because their fur is a haven for algae, moths, mites, and beetles.

When sloths are babies they cuddle with their mother and siblings. However, once they reach adolescence, approaching sexual maturity, they require distance from one another.

How long do sloths sleep?

Sloths sleep between 15 and 18 hours per day.

link to Scuba Diving in Costa Rica: Exploring the Sea

Continue Reading
link to Vegetarian Costa Rica: It’s Easier Than You Might Think

In a country known for healthy food options and whose most well-known staple foods are based on rice and beans, it’s easy to be a vegetarian in Costa Rica.  Breakfast is usually gallo...