Traditional Costa Rican cuisine is underrated. It’s not as popular worldwide as spicy Mexican food. Nor is it exalted like the French and Italian gastronomy. Nonetheless, la comida tipica de Costa Rica (or Costa Rican typical food) is made of fresh, locally sourced ingredients, and when well prepared, it is delicious.

Here are some traditional and popular foods that you may find yourself eating while in Costa Rica.

Gallo Pinto (Spanish for spotted rooster) is arguably the most Costa Rican dish. In fact, there is a saying, mas tico que gallo pinto, which means “more tico than gallo pinto.” to describe something or someone that is characteristically Costa Rican.

Gallo pinto is a breakfast food, made from rice, beans, onions, green and/or red peppers (which are referred to as chiles dulces), cilantro, and the national condiment of Costa Rica, Salsa Lizano.

It is often served with eggs, bacon, fried cheese, and fruit to make a hearty breakfast.

Don’t be surprised to see a small container of natilla, similar to sour cream, on the side for drizzling. 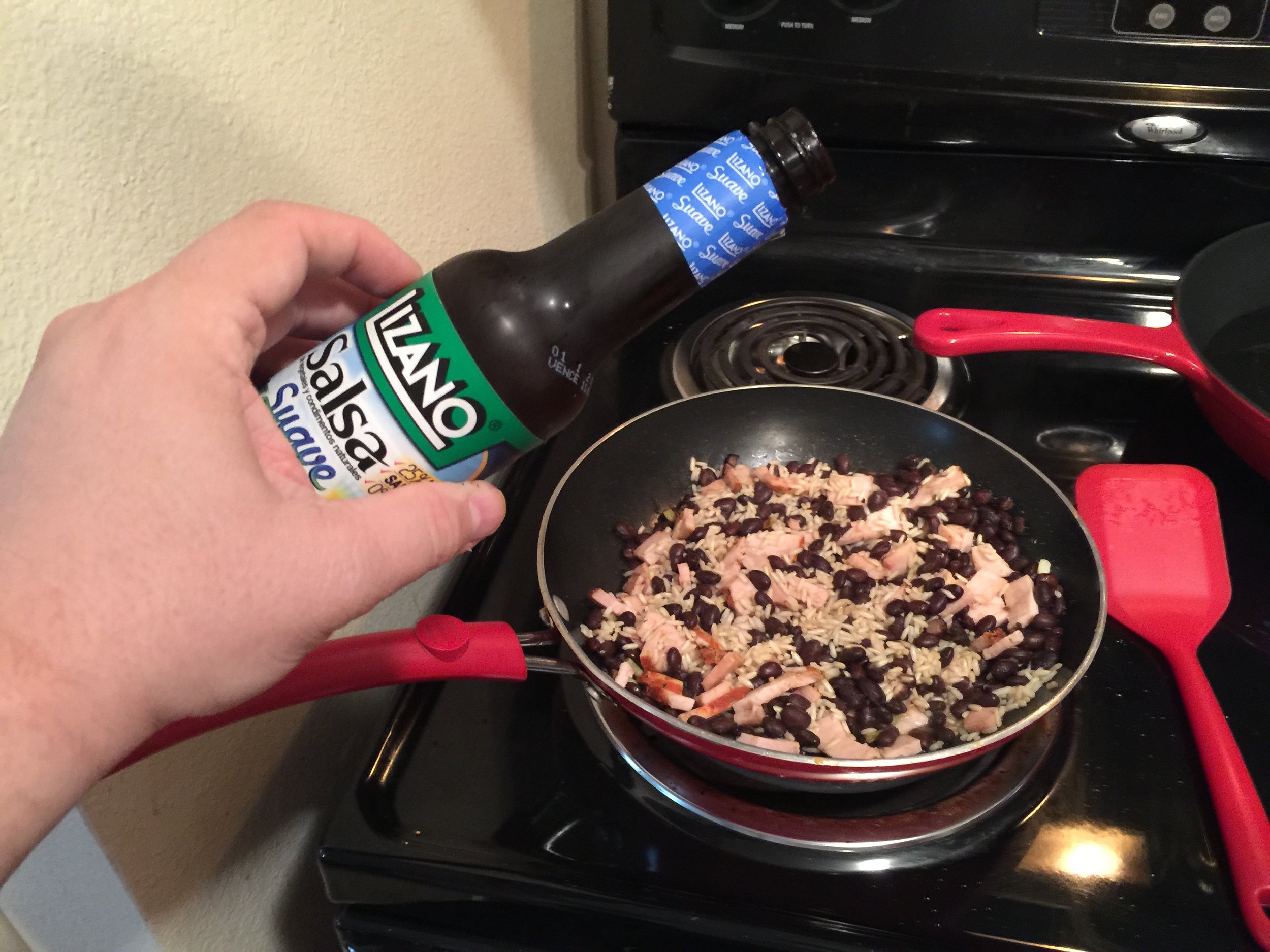 While gallo pinto is the culinary epitome of Costa Rica, it isn’t the only country in Central America where it is common. Nicaragua, to the north, has a traditional gallo pinto, too. The primary difference is that Nicaraguan gallo pinto uses red beans instead of black beans.

Chifrijo is a wildly popular bar food in Costa Rica. It takes its name from its three principal ingredients, fried pork (chicharron in Spanish), chilis, and beans (frijoles tiernas in Spanish). It also contains rice, pico de gallo or chimichurri, bell peppers, onions, and often topped with avocado. It is usually served with a few corn tortilla chips.

The dish was first served, in 1979, at Restaurante y Bar Cordero’s in the Tibas neighborhood of San José, near Ricardo Saprissa Stadium.

A casado isn’t a kind of food, so much is it a specific kind of dish that is commonly served in restaurants in Costa Rica. It usually consists of meat, like chicken, fish or pork; bean; rice; salad and/or vegetables; and, bread or tortilla. However, we have seen (and eaten) casados with a wide range of foods, including fried yuca and plantains (which we talk about below).

The word, casado, literally means married or a married man.

The origin of the name in dispute but Costa Rican author Marjorie Ross offers a few potential origin stories. One story explains that workers on lunch break desired food that was like homemade, or that a married man would be served by his wife.

Another story alleges that diners were sick of a local restaurant serving small portions and they demanded to be treated generously, like the proprietors would treat their husbands.

No matter what the truth is, casados are popular and inexpensive options at a local restaurant.

Olla de Carne is a beef-based stew that is popular at family functions. Besides the meat and broth, olla de carne includes a variety of vegetables, including:

Traditionally, upon serving, the meat and vegetables are removed from the broth and served separately. Each diner can add ingredients based on their own tastes and desires. 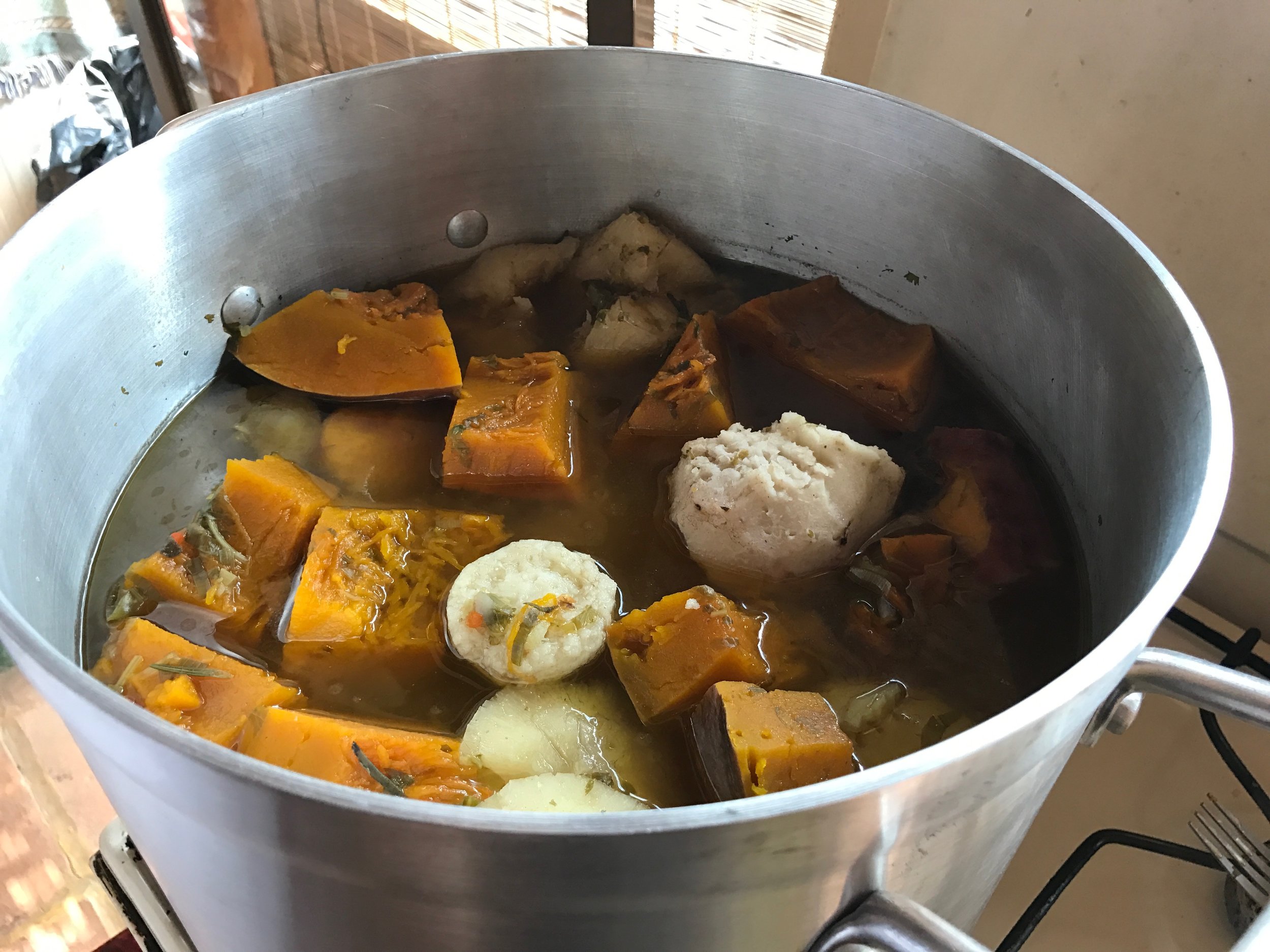 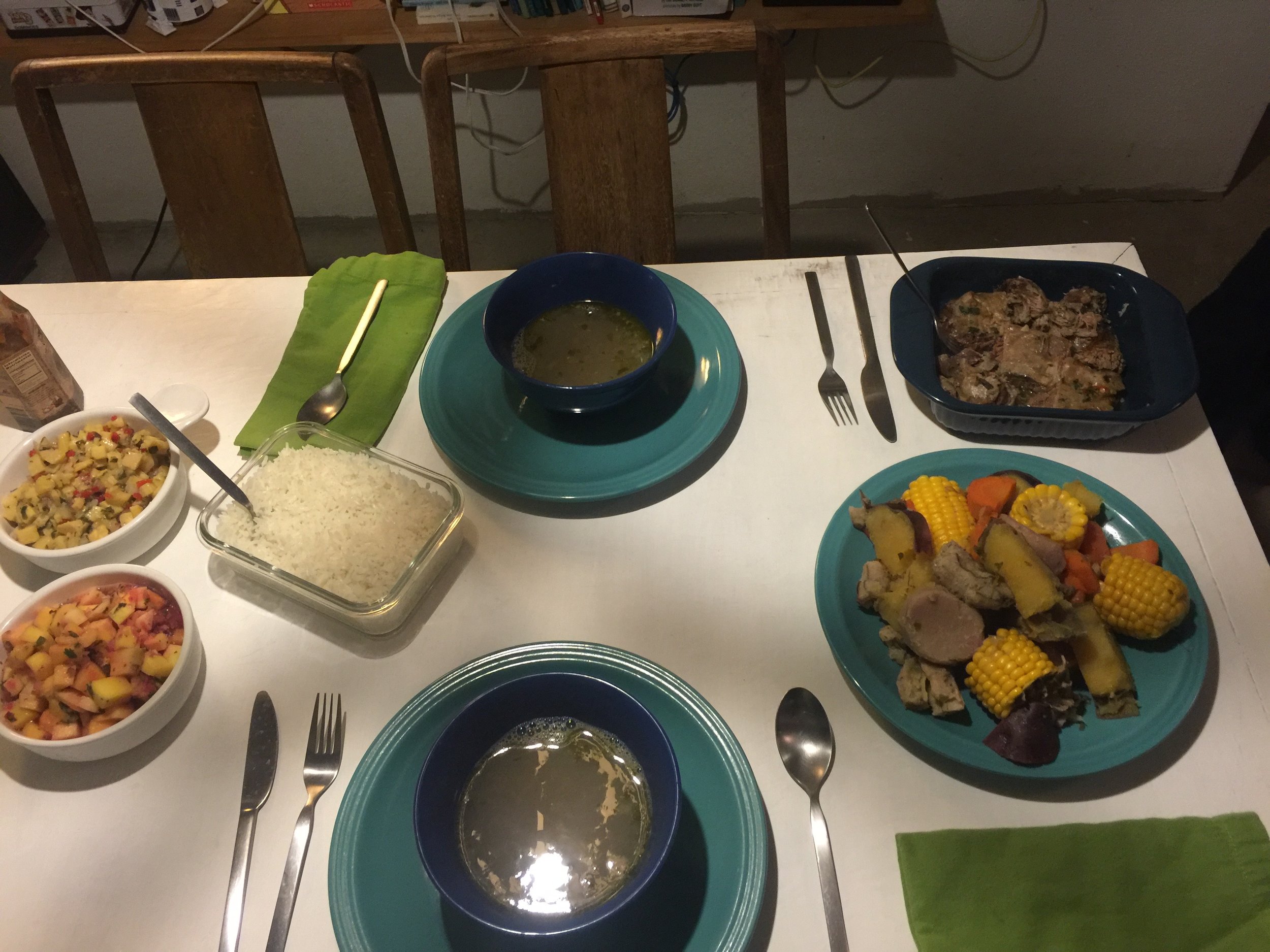 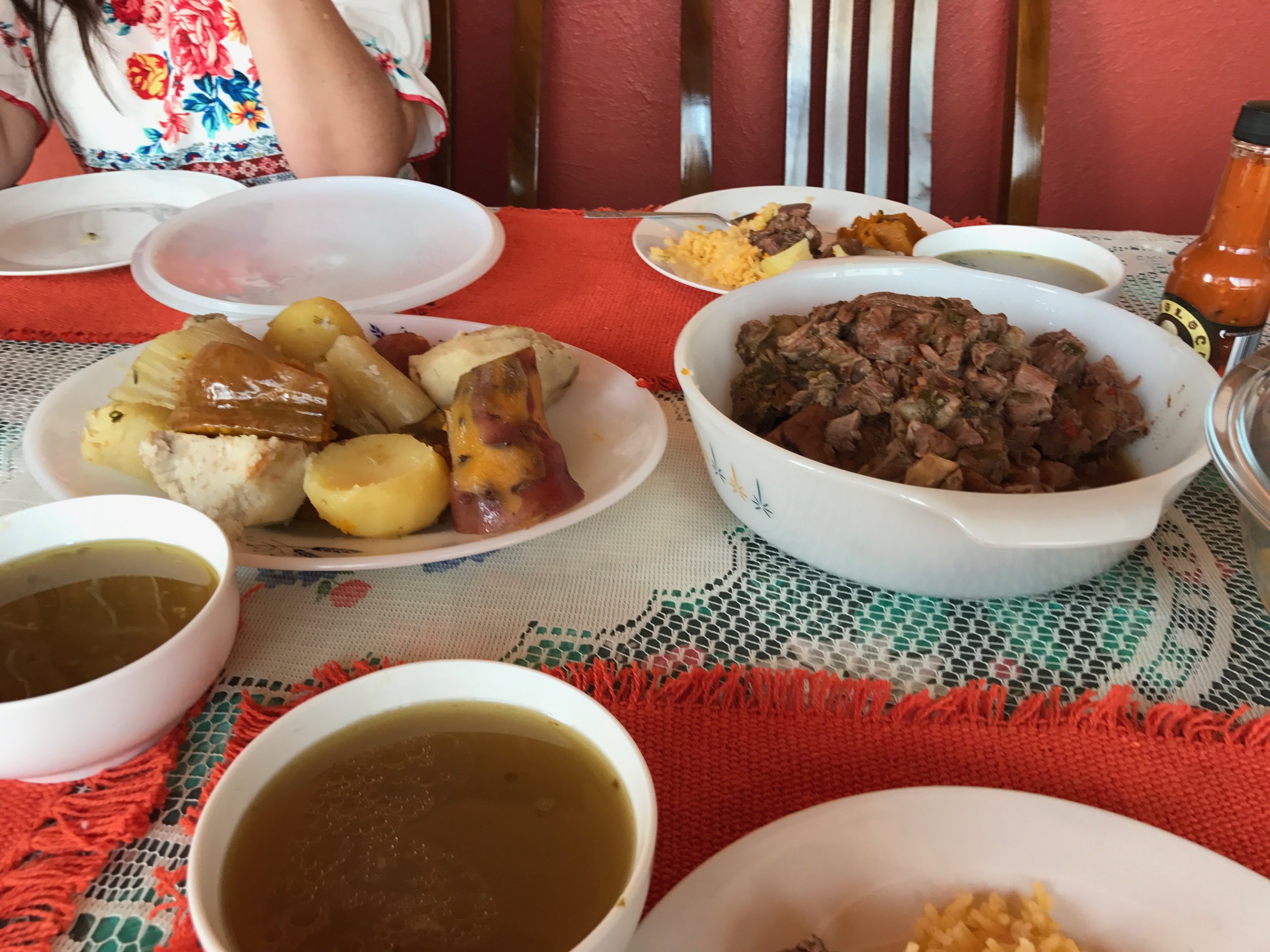 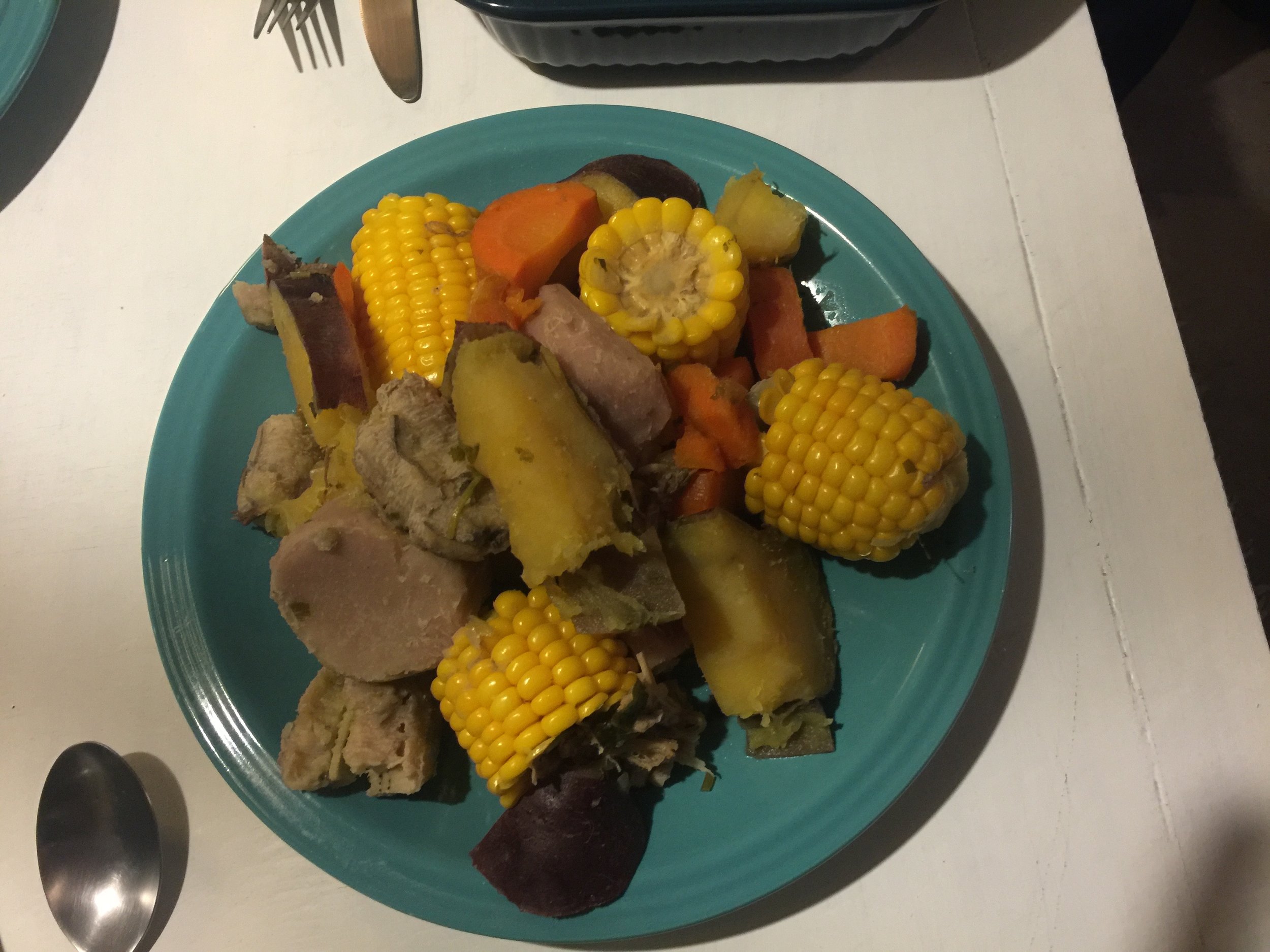 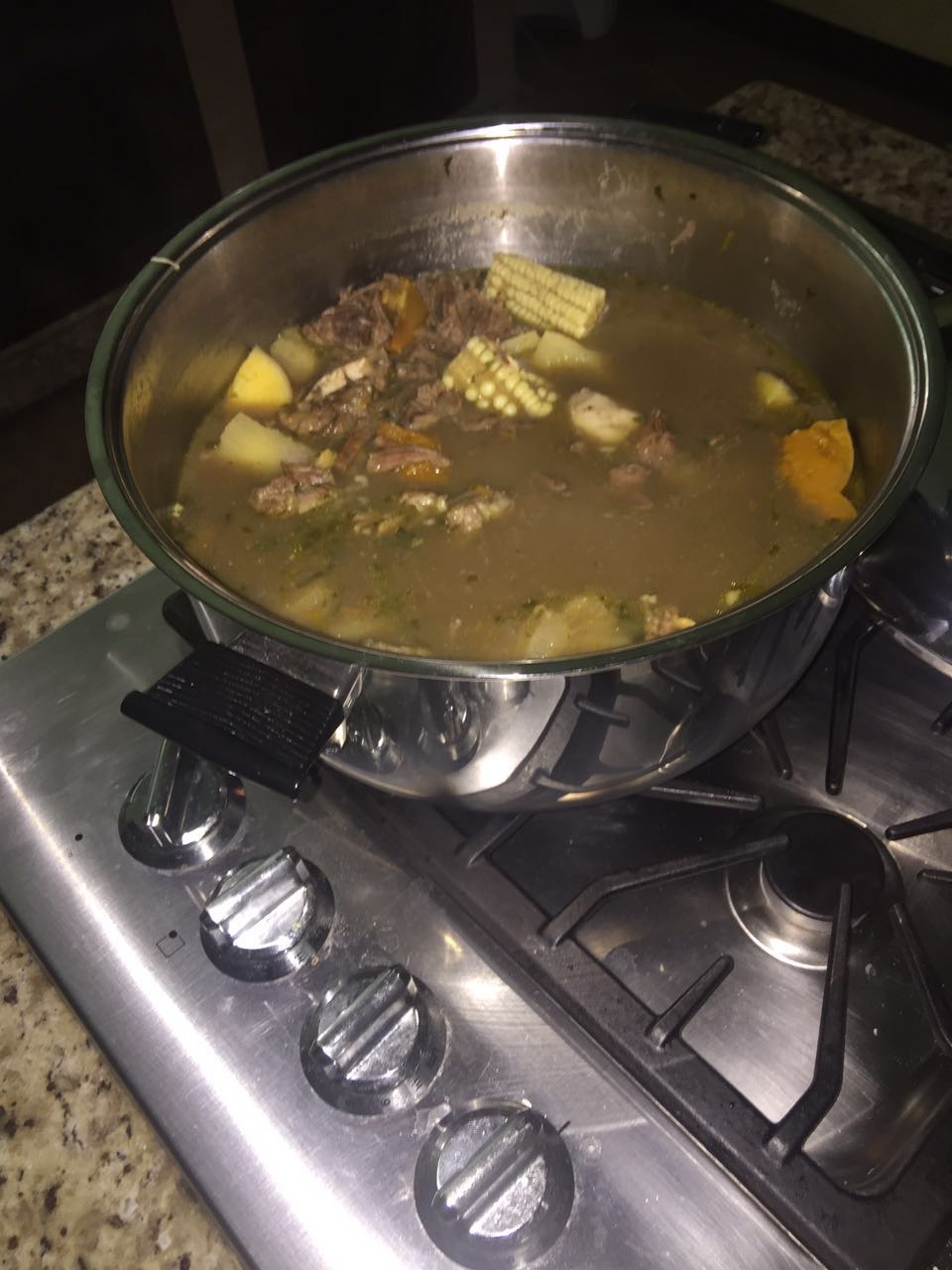 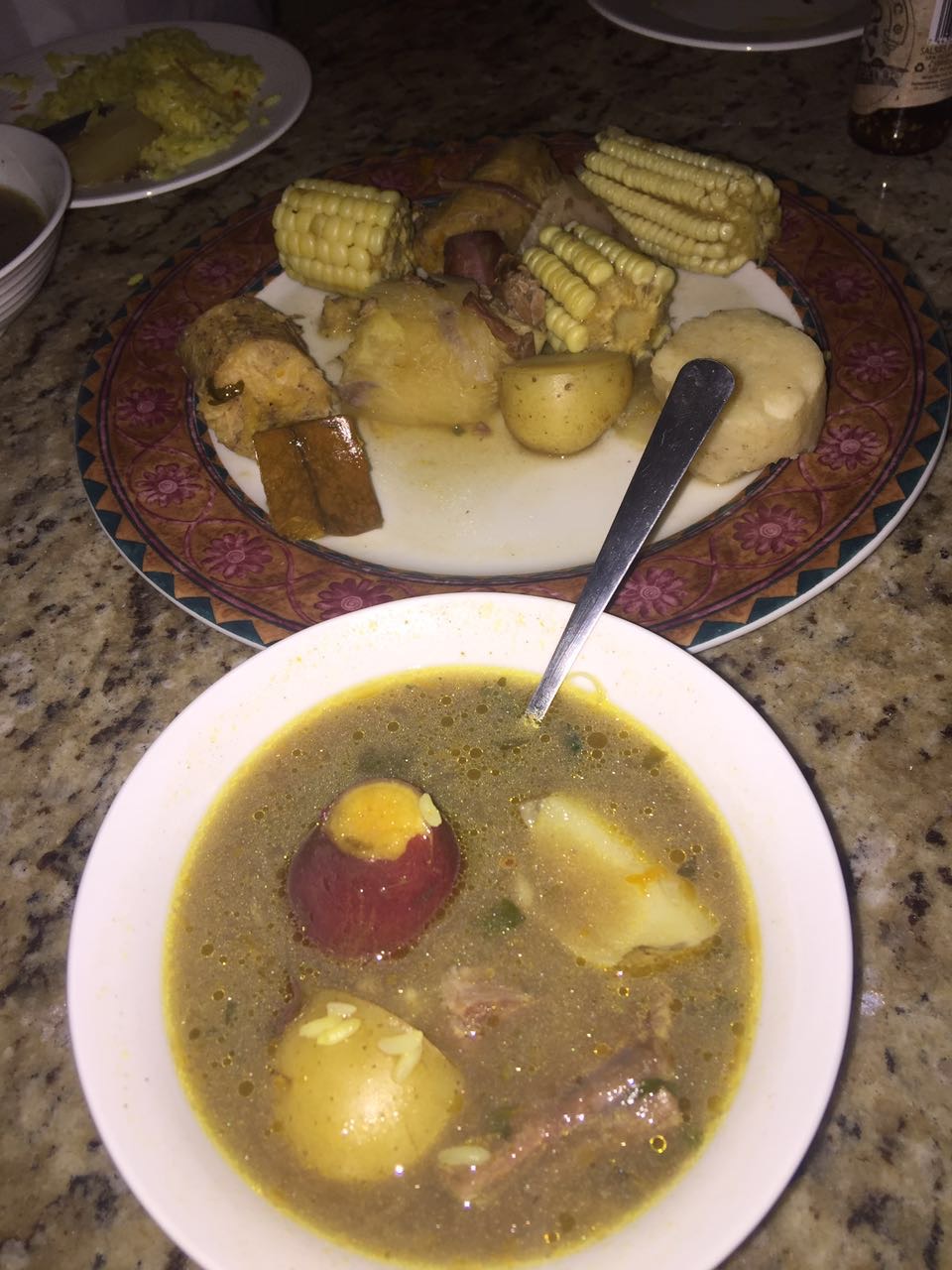 My first time eating olla de carne, prepared by a friend, I wasn’t sure how you are supposed to eat the corn on the cob, which is just hanging out in the broth, without being messy and impolite.

It turns out that you just pull it out and eat it with your hands. Simple. Easy.

Sopa Negra is a black bean soup that is often thought of as having healing properties, similar to how North Americans might think of chicken noodle soup.

Common ingredients include black beans, onion, tomato, and cilantro. After cooking, the ingredients are pureed in a blender and served with rice and a hard boiled egg.

Oxtail soup isn’t exclusively a Costa Rican dish. However, it holds an important place in tico gastronomy as one of the traditional treatments for a hangover. It is similar to olla de carne in that it contains many locally-sourced vegetables in a beef broth.

Fried plantains (or platanos fritos) are a common side dish at any meal. You will find them along side eggs and gallo pinto at breakfast; as part of a traditional casado lunch; and, at dinner, too.

Ripe plantains (or maduros) are best for frying.

They are simple to make. You just fry plantain slices on medium heat in a little oil or butter until they turn golden brown.

Unripe plantains, or platanos verdes, are used to make patacones. These delicious little nuggets are popular snacks or alongside a larger meal. In other countries, they are sometimes called tostones. 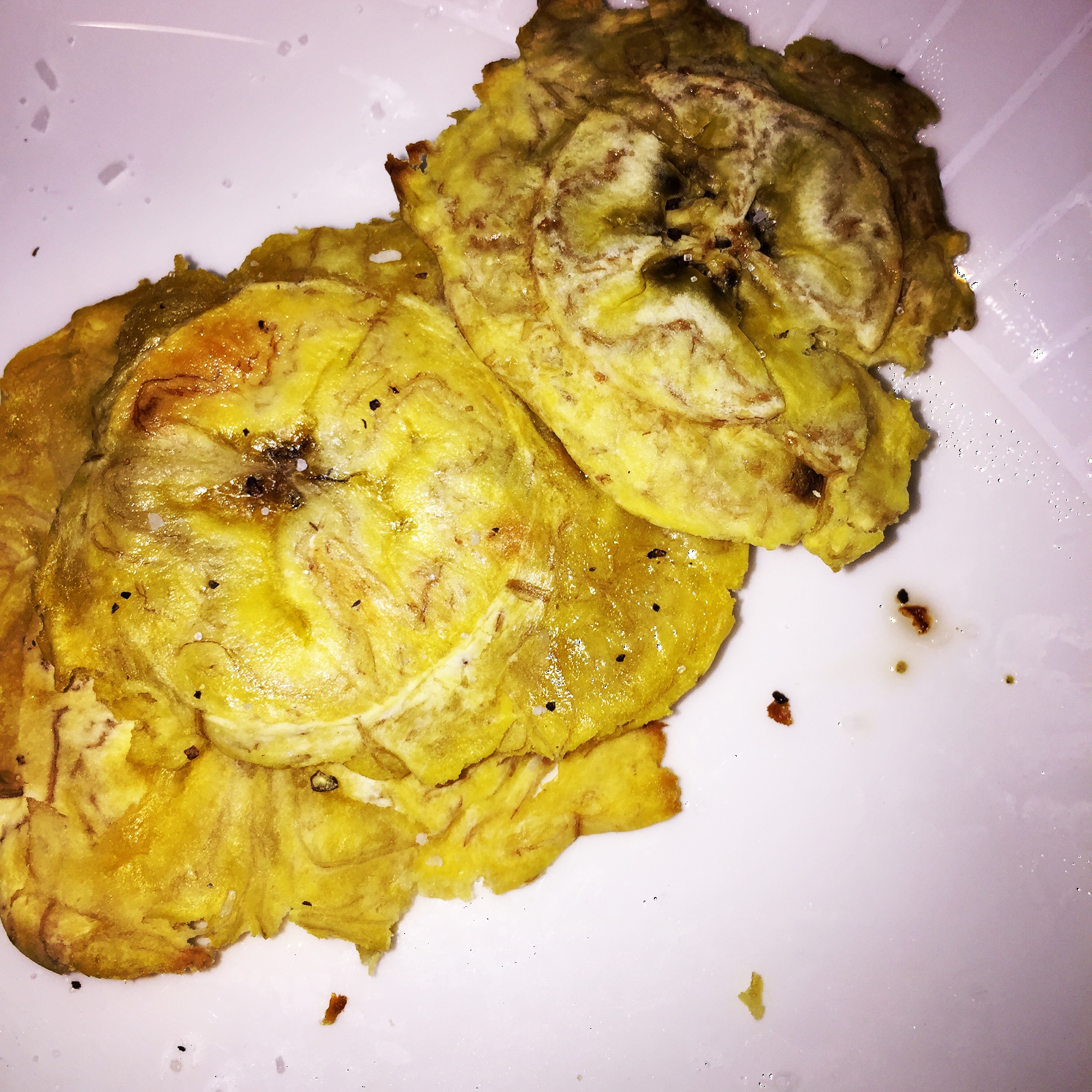 To make patacones, you peel and cut an unripe plantain into coins. Then, boil or saute the pieces until they become soft enough to smash down, but not so soft that they break apart.

Once the pieces are moderately soft, remove them from the heat, and mash them down, using a hard flat surface, like the bottom of a glass or cup. It helps to put a little oil on the bottom of the surface to keep the plantain from sticking.

Place the flattened plantain pieces in a pan and saute them until the outsides are crispy.

Yuca (not to be confused with yucca–which is different) is a common tropical root vegetable.

If you see it at the market, you can identify it because it has the same basic shape of a billy club or short baseball bat. The exterior rind looks a bit like tree bark. And, it is heavy.

You never want to eat yuca raw. Uncooked, unprepared yuca can have unhealthy levels of cyanide.

The process of cooking yuca can take a long time. It is normally cut up into slices, the bitter fiber at the center is removed, and then it is soaked and cooked for hours. 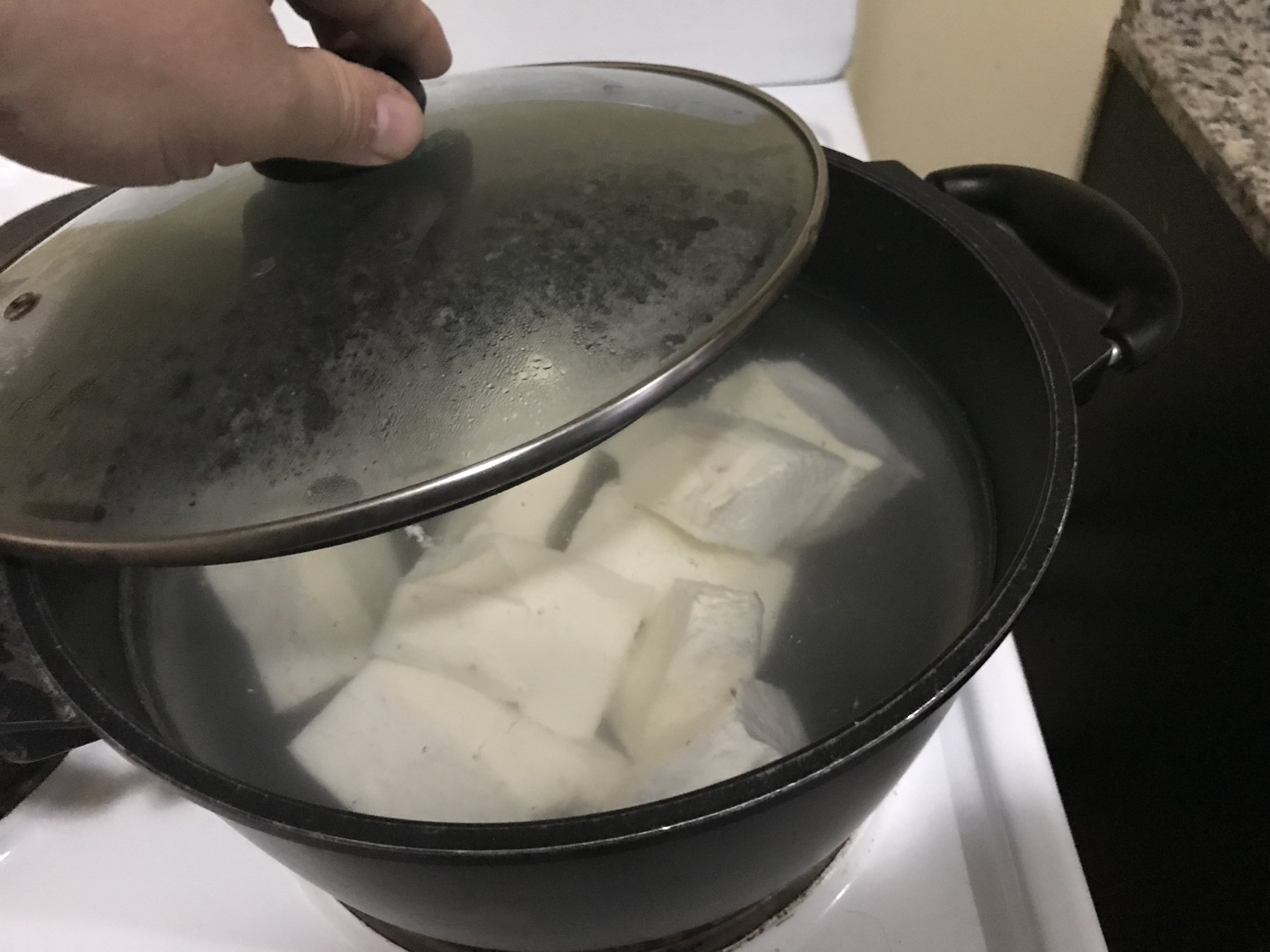 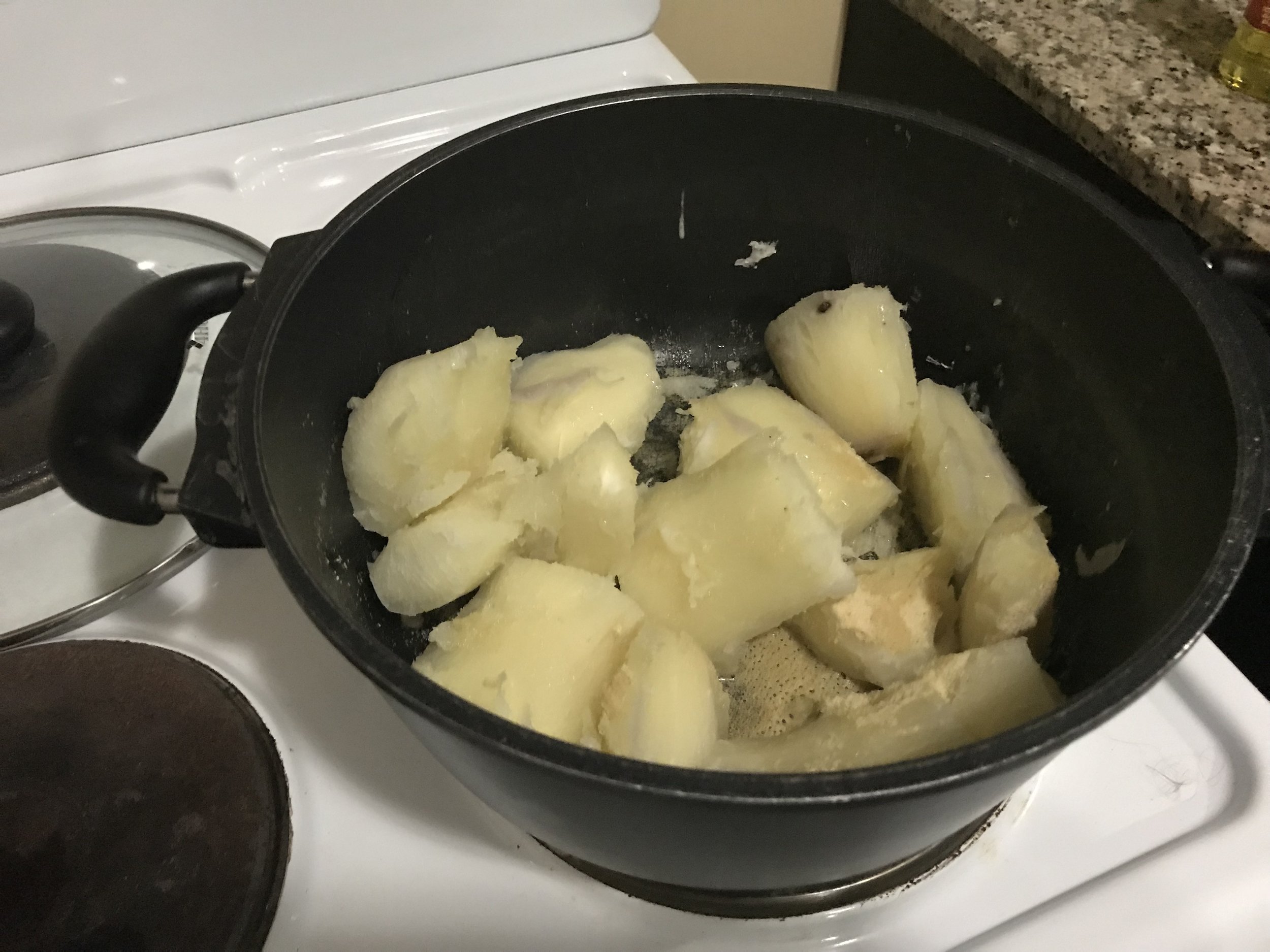 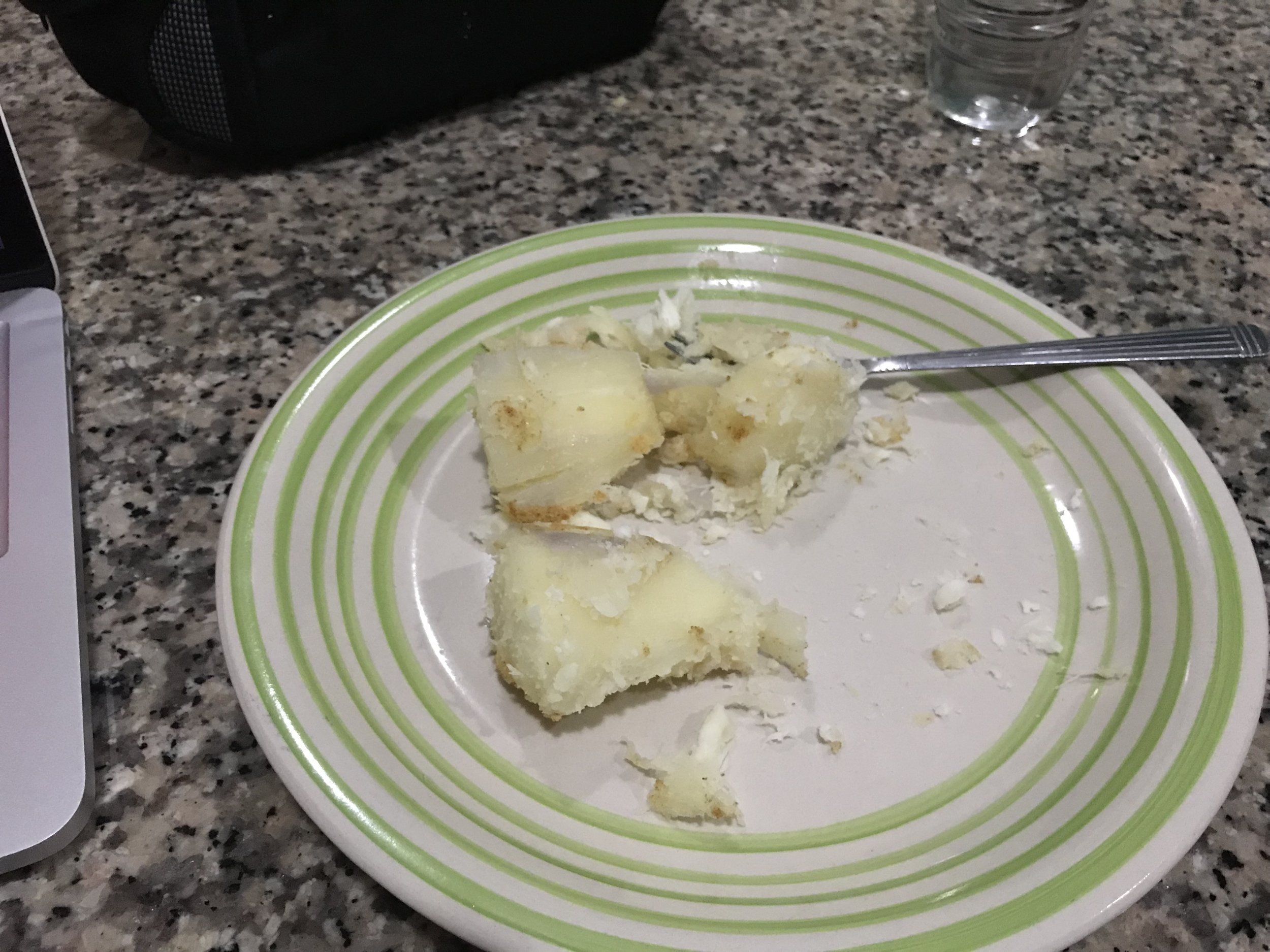 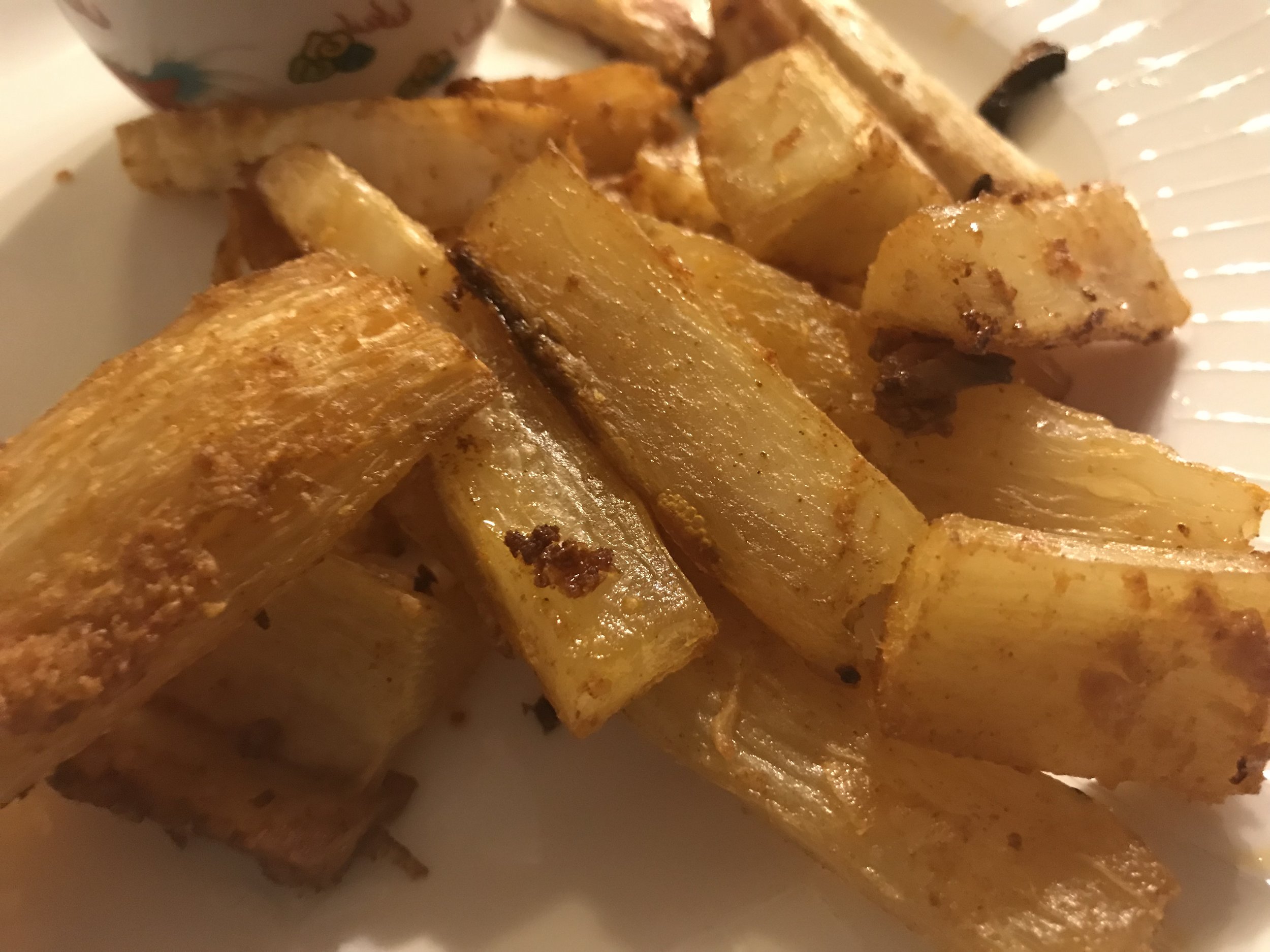 If you love french fries then you should try fried yuca.

If you find yourself on the Caribbean side of Costa Rica, you are going to encounter a whole different level of culinary experience. The Afro-Caribbean influence in Limon, Costa Rica’s Caribbean province, is throughout the culture, art, ambiance, and food.

Ingredients in this kind of food, that you won’t necessarily find in other tico food, include coconut milk and chile panameño, which is a very spicy chili pepper known as a scotch bonnet in English-speaking countries.

A dish called rice and beans is the most common and emblematic food of Costa Rica’s Caribbean. In order to explain what this dish is, we are going to start by talking about what it isn’t.

It isn’t gallo pinto. It isn’t the common beans and rice that you may get as part of casado somewhere else in Costa Rica.

Rice and beans, as served in Puerto Viejo and the surrounding areas, is a specific dish, prepared in coconut milk and small amounts of chile panameño, giving it some spicy heat. It is often served with fish or chicken, and fried plantains.

Coconut milk is a common ingredient in Afro-Caribbean food. In fact, it is the base for a delicious seafood soup called rondón.

Traditionally, rondón is the kind of food made from yesterday’s leftover food. The odds and ends of seafood and local vegetables (like yucas, carrots, and potatoes) are simmered in coconut milk for a long time, allowing the flavors to mix.

This dish, sometimes spelled Paty or Patty, looks like a yellow empanada. It is full of beef or chicken, vegetables, and is usually spicy, due to the inclusion of a chile panameño.

This cake, which is known throughout Latin America, is among the most popular desserts in Costa Rica.

Why shouldn’t it be?

It is made from sugar, butter, sweetened condensed milk, whipping cream, rum, and more sugar.

link to Keto in Costa Rica

You can eat a low carb ketogenic diet but it takes some planning and knowledge. Learn more.